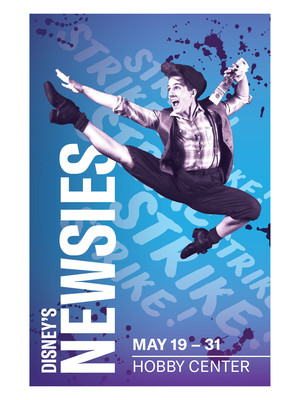 Rousing songs by Alan Menken and Jack Feldman, high-energy dance numbers, an appealing cast and an uplifting story make this reconceived version of the Christian Bale movie one of Disney Theatrical's most entertaining new properties in years

Theater Under The Stars continues their stellar 51st season programming with Disney's Broadway blockbuster Newsies, coming to the Hobby Center in the spring of 2020! Based on the 1992 feature film, the song and dance spectacular garnered two Tonys during its 1000-show stint on Broadway before becoming a smash-hit touring production across the country thanks to Alan Menken's award-winning score, Harvey Fierstein's witty book and heartwarming story about brotherhood, class systems and fighting the powers at be for truth and fairness.

Set in turn-of-the-century New York City, Newsies chronicles the real events of the Newsboy's Strike of 1899. A gang of kids who sell newspapers on the streets, the Newsies are lead by the independent, surly yet charismatic Jack Kelly, a youngster who dreams of making a better life for himself out West. When titans of the publishing industry Joseph Pulitzer and William Randolph Hearst raise distribution prices at the expense of the newsboys, Jack finds a new cause to fight for, rallying his brothers across the city to stand up and fight for what's right.

Sound good to you? Share this page on social media and let your friends know about Disneys Newsies at Sarofim Hall.