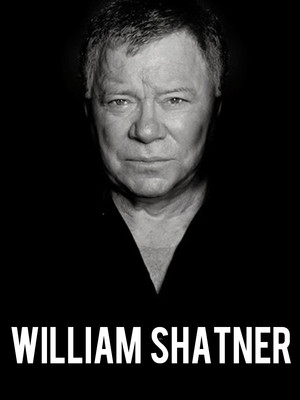 One of TV's greatest personalities

To Boldy Go Where No Solo Show Has Gone Before

Legendary actor and personality extraordinaire William Shatner is headed out across the country with his critically acclaimed one-man show. Following a special screening of Star Trek II: The Wrath of Kahn see Shatner relive some of the biggest moments in his career, including Star Trek, T.J. Hooker and his bizarre but strangely hypnotic musical career. The show will take you on a voyage throughout his life and career from Shakespearean actor, through to his expansive credits on television and film.

A keen raconteur and cultural icon, his blunt memoirs of his turbulent private and profressional life are delivered with unerring openness, offering a unique insight into the man behind the yellow sweater. Catch Shatner in all his glory when he visits your town.

I have been a fan of William Shatner for over 50 years. He was absolutely... more

My wife and I saw William Shatner last evening at the Marin Center in San... more

Sound good to you? Share this page on social media and let your friends know about William Shatner at Arena Theater.