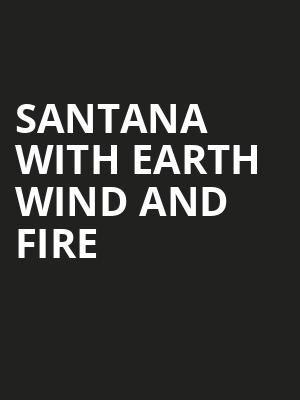 Santana with Earth Wind and Fire

Why See Santana with Earth Wind and Fire?

Recognized as one of the world's great guitarists, Carlos Santana has an extraordinary career stretching back more than forty years. Now for 2021, he's hitting the road once more on the Miraculous Supernatural tour where he'll be sharing the stage with co-headliners, funk and soul legends, Earth Wind and Fire!

Santana first came to public attention in the sixties as the founder of his eponymous band. A star turn at the 1969 Woodstock festival made their name and Santana has been throwing out licks ever since, either leading his band or as a solo artist. His career has had its ups and downs but was thoroughly revived in the late 1990s, with a series of collaborative albums with some of the world's biggest stars.

Formed by multi-talented bandleader, drummer, songwriter and all round musical genius Maurice White in 1969, Earth Wind & Fire quickly rose to the forefront of the 70s funk scene thanks to their sonic explorations and fusions with other genres including disco, pop, rock, psychedelia, jazz, world music, blues and folk. In the five decades sine their formation, the ever popular outfit has crafted a legacy of timeless hits that continue to soundtrack the lives of old and young today.

War, EWF and Carlos all sounded amazing. As good as it gets! more

I'm still smiling from the magic and energy Santana and EarthvWind and... more

Sound good to you? Share this page on social media and let your friends know about Santana with Earth Wind and Fire at Cynthia Woods Mitchell Pavilion.