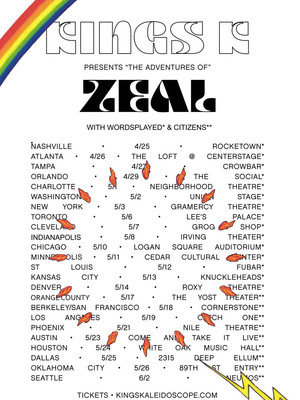 Kings Kaleidoscope is one of the rare bands in Christian music that isn't afraid to do whatever they want.

Seattle-based Praise & Worship alt rockers Kings Kaleidoscope are gearing up for the release and tour of their fourth studio album Zeal and their pulling no punches when bringing its anthemic call-to-arms to the stage. Described as a direct challenge to the apathy floating around the post-christian movement, Zeal is their most ambitious and euphoric release yet.

Never one to be pinned down by any particular label, Kings Kaleidoscope constantly explore new territory and blend a multitude of genres from math-rock to hip hop, analogue and electronic textures in a devil-may-care attitude that result in a grand, almost orchestral chamber pop sound. Unafraid to deeply explore scripture, they often tackle heavy-hitting subjects like depression, suicide and crises of faith whilst also revelling in the joy of their beliefs and the strength they provide.

Sound good to you? Share this page on social media and let your friends know about Kings Kaleidoscope at White Oak Music Hall.