Sorry! You missed B-52s with OMD and Berlin at Smart Financial Center 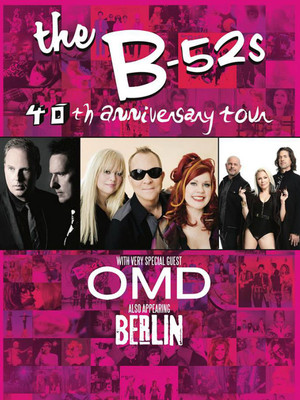 B-52s with OMD and Berlin

The B52s created an entire world all their own, one where goofy and sexy could co-exist in the same song, where comedy wasn't made without a great sense of songcraft behind it, and, best of all, absolutely nothing else sounds like it

Why See B-52s with OMD and Berlin?

The year is 1976. After sharing a flaming volcano cocktail at a local Chinese restaurant in Athens, Georgia, five wayward musicians held the impromptu jam that would begin an epic journey for iconic New Wave rock and rollers The B-52s. Fast forward over four decades and the quartet is still going strong having forged a legacy filled with smash hits including Rock Lobster and Love Shack.

Celebrate The B-52s' flamboyant blend of danceable post-punk-tinged pop during their 40th Anniversary Tour, coming to 25 different cities across North America this summer! The iconic purveyors of camp have also enlisted the help of English electronic duo Orchestral Manoeuvres in the Dark and fellow New Wave pioneers Berlin (fronted by the inimitable Terri Nun), who'll be strutting their stuff as faithful support acts.

Seen B-52s with OMD and Berlin? Loved it? Hated it?

Sound good to you? Share this page on social media and let your friends know about B-52s with OMD and Berlin at Smart Financial Center.