Sorry! You missed Pouya at House of Blues 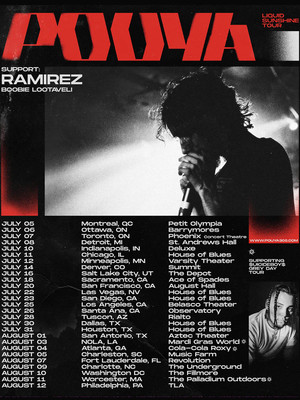 Pouya brings his Floridian beats to you

Florida based Pouya is heading out on tour in 2019! After creating quite the name for himself in the underground rap scene in southern-Florida through his various mix-tapes, Pouya released his debut studio album "Underground Underdog" in 2016. Since then the young-star has released a further three albums, his most recent of which (2019's Pouya and Boobie Lootavelli: Greatest Hits, Vol. 3) sees the rapper team up with underground sensation Boobie Lootavelli on a range of tracks.

With names like Rob Bank$, $uicideboys and Rich Chigga all lending their ears and fans to the 24-year-old, Pouya signed to Bank$'s record label Smart Stunnas when he was just 17 years old. First making waves with his 2013 hit Get Buck, with the track hitting 15 million steams (and counting) the young star has been carefully cultivating a unique space for himself in the ever-growing rap scene!

Don't miss Pouya as he embarks on his Liquid Sunshine Tour this summer!

Pouya was the craziest concert i've ever been to definitely would go again.... more

Sound good to you? Share this page on social media and let your friends know about Pouya at House of Blues.