Sorry! You missed Mark Manson at House of Blues 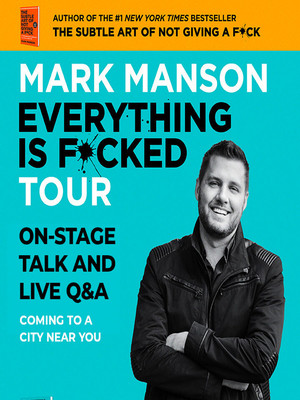 Mark offers self-help for people who hate self-help a no-BS brand of life advice and cultural commentary that has struck a chord with people around the world.

Mark Manson Takes His Words to the Stage

Straight talking New York Times bestselling author Mark Manson will hit nine states on his upcoming American tour which kicks off in New York. The author began his writing career as a blogger, before penning his book 'The Subtle Art of Not Giving a F*ck' and becoming a noted name internationally, selling millions of copies. Now, Mark is preparing to take his ethos to the stage on his 'Everything is F*cked Tour.'

Mark mixes wisdom with humor to inspire audiences of all ages to care less, and his online blog has grabbed readers with titles like 'The Subtle Art of Not Giving a Fuck,' 'Stop Trying to Be Happy' and 'The Most Important Question of Your Life.'

His matter of fact approach to self-help has been a winner for him so far and his honesty shines through with everything that he writes.

I loved the first book, got the new book when I went to the show last night.... more

Sound good to you? Share this page on social media and let your friends know about Mark Manson at House of Blues.