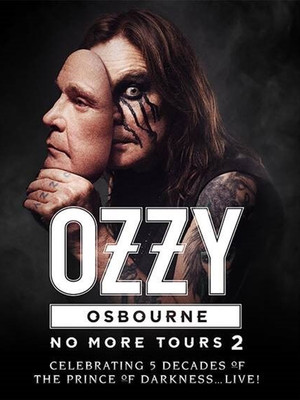 Your last chance to see this Rock legend on tour!

Grammy Award Winner and Rock and Rock Hall of Fame inductee, Ozzy Osbourne is heading out on his final tour. Bidding farewell to life on the road Ozzy nods to his 1992 trek No More Tours, with this his last, No More Tours 2. After a short route around South America for some solo shows, Ozzy teams up with special guests Stone Sour for a mammoth North American tour in this final goodbye to the touring life.

Saying "I've been blessed with an amazing life, I'm looking at this final tour as being a huge celebration for my fans and anyone who has enjoyed my music over the past five decades" Osbourne accumulates 50 years worth of hits into the ultimate night of head banging and mosh pits as his fans celebrate the work of the great artist.

Rock legend Ozzy bids farewell to life on the road

In a career that has produced over 20 albums, (nine with band, Black Sabbath and 11 as a solo artist) as well as a Grammy award, NME award and Teen Choice Award (for his families reality TV show The Osbournes) and not forgetting its fair share of controversy this Brit is ready to enjoy his success and a quieter life off the road.

Sound good to you? Share this page on social media and let your friends know about Ozzy Osbourne and Stone Sour at Cynthia Woods Mitchell Pavilion.