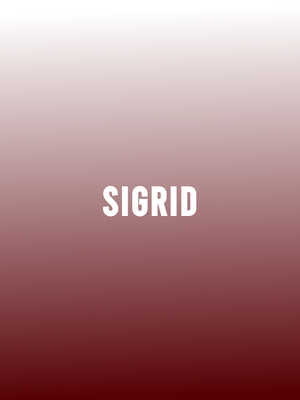 Most arresting, though, is Sigrid's supple, gargantuan voice: tight-throated and staccato one moment, silky and slick the next. "Sucker Punch", with its flattened pre-chorus and bombastic bridge, sounds fantastic live.

Norwegian breakout pop sensation Sigrid visits North America in September with a tour in support of her debut album Sucker Punch. The powerpop singer-songwriter kicks off with a show at the Fonda Theatre in LA on September 11th, before a month-long trek across the US and Canada, ending in St. Louis.

Since signing with Island Records in 2016 Sigrid's rise has been meteoric. Her 2017 debut EP Don't Kill My Vibe became an instant global success, leading to her being named the winner of BBC Music Sound of 2018 - an accolade previously held by the likes of Ellie Goulding, Jessie J and Haim. Don't miss this chance to catch an artist on the brink of global superstardom.

Seen Sigrid? Loved it? Hated it?

Sound good to you? Share this page on social media and let your friends know about Sigrid at White Oak Music Hall.