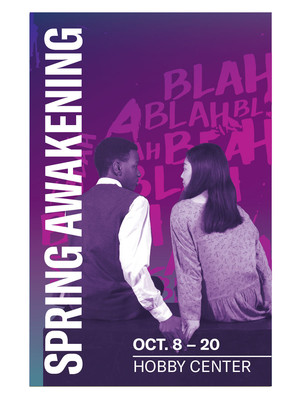 ...its arching sense of adventure makes an unforgettable statement... Imprinted on the memory is the happy sensation of having witnessed something unusual and aspiring, something vital and new.

Duncan Sheik's luminous rock musical Spring Awakening garnered eight Tony Awards, including the prize for Best Musical, Direction, Book and Score during its debut Broadway run in 2006. Breaking the musical theater mould with a gripping adaptation of German playwright Frank Wedekind's once controversial 1891 play, the production transformed the original text's repressed teenagers into creative dreamers, schemers and rebellious rock stars thanks to the soaring melodies and pulsing rhythms of its electrifying indie-rock infused score. Don't miss the modern coming-of-age musical when it lights up Houston as part of TUTS 2019/20 theater season this fall!

Set in Germany in the late 19th century, Spring Awakening chronicles the trials and tribulations of the sexual awakening and self discovery of a group of school kids. There's handsome genius Melchior and innocent Wendla whose curiosity and passion grows in each others arms, and social outcast Mortiz, who struggles to conform to society's norms, amongst others. Their parents and teachers simply won't educate them when it comes to the mechanics of sex and physical love, so the hormone-filled teens rail against the system and forge their own path to adulthood.

Please note, the above image is taken from a past production of Spring Awakening and does not reflect current casting.

Sound good to you? Share this page on social media and let your friends know about Spring Awakening at Sarofim Hall.