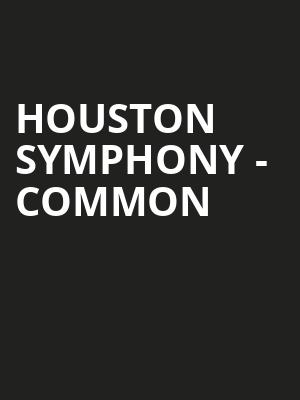 Common has long occupied his own space in hip-hop. "Woke" before "woke" was a thing, the Chicago MC has been the prototype and paragon of the so-called "conscious" rapper since the early 1990s.

Hip hop icon Common Performs For One Night Only

Whilst they may seem on opposite ends of the sonic spectrum, the groove-heavy beats of hip hop and soaring orchestrations of classical music are often fused to create musical magic. The two distinctive worlds collide in a special one-night-only collaboration between the Houston Symphony Orchestra and Common, the Grammy and Oscar-winning rapper who's become one of the most influential icons of the genre since his debut in the early 1990s.

Pulling himself up from Chicago's underground scene, Common AKA Lonnie Corant Jaman Shuka Rashid Lynn and his prodigious skill rose to mainstream attention thanks to the jazz-leaning rhythms of his flow and thought-provoking, political lyrics. Together with the world class symphony and principal pops conductor Steven Reineke, he'll be bringing new life to old classics like breakthrough hit single Love of My Life (An Ode To Hip Hop), Grammy-winning single Southside and Academy Award-winning motion picture song Glory.

Sound good to you? Share this page on social media and let your friends know about Houston Symphony - Common at Sarofim Hall.