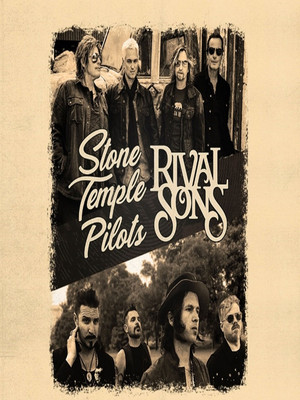 We are thrilled about this tour and grateful to share these upcoming shows with Rival Sons. A great band! They don't make them like this anymore.

Stone Temple Pilots became staples of rock with their hit 1992 album 'Core.' The album sold over 18 million copies in the US alone and was certified 8 platinum. The band are also Grammy and Billboard Award winners and released a second self-titled album last year.

Rival Sons had the honor of touring with metal gods Black Sabbath in 2016. They then went on to release their latest album 'Feral Roots' earlier this year which was described as an album that "takes the modern radio-rock sound and elevates it to a whole new level" by music blog Louder Than War and "beautiful and intense" by Guitar World.

Maxdonaldo: “What a great show!”

I bought tickets thinking, "I like what I've seen of Jeff Gutt with STP... more

Sound good to you? Share this page on social media and let your friends know about Stone Temple Pilots and Rival Sons at Revention Music Center.