Sorry! You missed Houston Symphony - Song and Dance: The Best of Broadway at Jones Hall for the Performing Arts 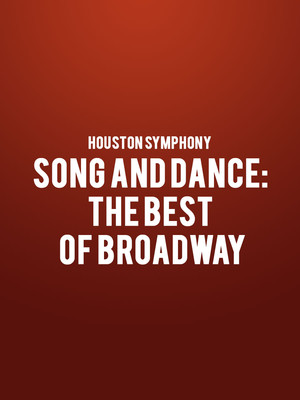 Houston Symphony - Song and Dance: The Best of Broadway

...the orchestra was swinging and rocking like nobody's business under the baton of the always energetic and pleasing to watch maestro Steven Reineke.

Why See Houston Symphony - Song and Dance: The Best of Broadway?

GET READY FOR A NIGHT OF OLD SCHOOL GLAMOUR

Maestro of Entertainment Steven Reineke and the Houston Pops Orchestra return for yet another dazzling season of star-studded movie moments, dazzling cirque acts, upbeat pop classics and non-stop musical fun! Evoking the glitz and glamour of the golden era of musical theatre, they invite audiences to don their glad rags and join them for a nostalgic program filled with beloved Broadway overtures, dreamlike ballets and 'fully company' arrangements featuring the Houston Symphony Chorus.

A critically lauded conductor, Reineke has established his reputation as the go-to baton-twirler for popular music in America with a music directorship of the New York Pops at Carnegie Hall, as well as positions as principal pops conductor of both the Washington's National Symphony Orchestra and the Toronto Symphony Orchestra. Performing music from the likes of Rodgers & Hammerstein, Bernstein and Styne, Reineke and co. are dab hands when it comes to thrilling, inspiring and taking the listener on an aural journey into the past.

Sound good to you? Share this page on social media and let your friends know about Houston Symphony - Song and Dance: The Best of Broadway at Jones Hall for the Performing Arts.