Sorry! You missed Old 97's at House of Blues 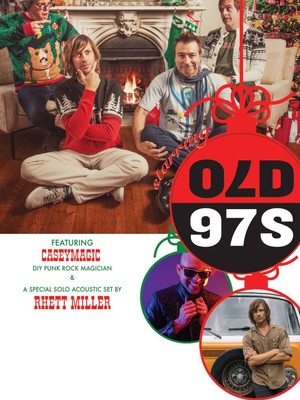 Dallas' most celebrated alt-country export of the past quarter-century

Alongside the likes of Drive-By Truckers, The Bottle Rockets and Uncle Tupelo, Texan quartet Old 97's are hailed as pioneers of the alt-country movement of the late 90s, fusing power pop hooks with an old country twang. After 11 stellar studio albums, the band are trailblazing in uncharted territory anew and releasing a brand new festive album 'Love The Holidays' in November 2018, followed by the nationwide 'Holiday Extravaganza Tour'.

Hitting the road right after Thanksgiving, Old 97's and frontman/lead songwriter Rhett Miller will bring a host of eclectic carol covers like longtime classic 'Auld Lang Syne' to the stage, as well as rocking new Yuletide tunes like 'Snow Angels', 'Rudolph Is Blue' and 'Gotta Love Being A Kid (Merry Christmas)' co-written with The Gourds' Kevin Russell and acclaimed muso Ben Greenman. To top it all off, Miller will perform an intimate acoustic solo set before each performance, alongside special guest performer Micheal Casey, a 'DIY punk rock magician' whose close-up magic and sleight-of-hand hijinks perfectly fit the fun and joy-filled theme of the evening.

Sound good to you? Share this page on social media and let your friends know about Old 97's at House of Blues.