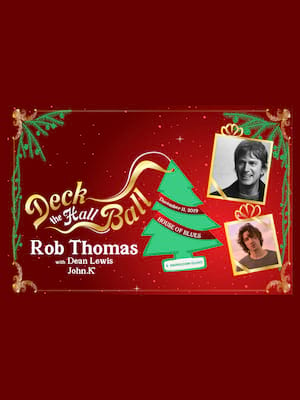 A consummate performer, Thomas is so much fun to watch. It's impossible to keep your eyes off of him as he works every inch of the stage

The home of the hottest pop hits on Houston's airwaves MIX 96.5 returns to blast away the winter blues with their annual festive Deck The Hall Ball concert. This year, they're inviting headliner Rob Thomas to the House Of Blues stage alongside rising Australian singer songwriter Dean Lewis and American pop/soul artist JOHN.k.

Perhaps best known as the front man of post-grunge rock icons Matchbox 20, Thomas successfully carved out a stellar solo career for himself with the release of his 2005 debut album Something To Be. Garnering two Grammy nominations for its sample-laden, quirky pop goodness, the album paved the way for three more albums, the most recent being 2019's 80s-influenced pop rock compilation Chip Tooth Smile. Thomas also received three Grammys for his memorable feature on Santana's immortal smash hit Smooth.

Sound good to you? Share this page on social media and let your friends know about MIX 96.5 Deck The Hall Ball - Rob Thomas at House of Blues.