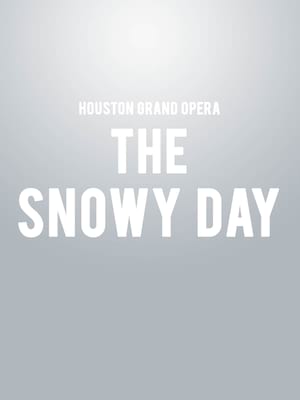 The Houston Grand Opera presents a family-friendly world premiere and just in time for the change of season to boot! As things start to get festive, the world-class ensemble conjures the magic of snowfall in The Snowy Day, a brand new work by Atlanta-based composer Joel Thompson and librettist/New York Times bestselling author Andrea Davis Pinkney. Rising American soprano Julia Bullock joins proceedings in the role of Peter whilst acclaimed opera maker Omer Ben Seadia directs.

What is the story of The Snowy Day?

Based on the beloved 1962 children's picture book by Ezra Jack Keats, The Snowy Day follows the frosty adventures of Peter, an African American kid who wakes up to the season's first snowfall. Donning a bright red snowsuit, the intrepid explorer heads outside, making footprints and trails through the snow as he goes. Too young to join in a snowball fight with the bigger kids, he contents himself by making snow angels and a snowman, as well as sliding down a hill. When he heads home with a snowball in his pocket, he discovers it has melted. Upon waking up the next day, he is overjoyed to find fresh snow has fallen and heads out to play with the wondrous white stuff with a friend in tow.

One hour and 15 minutes, with no intermission

Sound good to you? Share this page on social media and let your friends know about Houston Grand Opera - The Snowy Day at Brown Theater.