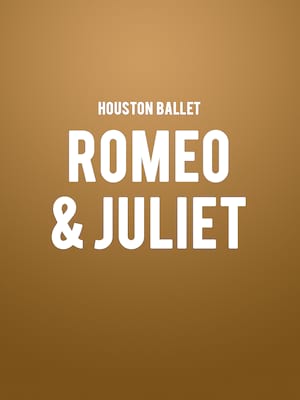 For never was a story of more woe than this of Juliet and her Romeo.

In fair Verona where we set our scene...

Following its world premiere during Houston Ballet's 2014/15 season, Stanton Welch's glorious and vivacious re-imagining of Romeo and Juliet returns. Perhaps the most famous love story the world over, Romeo and Juliet is a turbulent tale of forbidden love against the backdrop of a bitter feud between two rival families, leading to a shattering and unforgettable climax.

Drawn to Romeo by his own experiences as a dancer and actor, Welch's faithful retelling is set in 16th Century Verona, with sumptuous effect, heightened by sets and costumes and Prokofiev's breathtaking score.

What is the story?

In Verona, there are heated tensions between sworn enemies Montagues and Capulets. Their vicious hatred of one another is famed throughout the city, as is their often fatal skirmishes.

Romeo, the youngest of the Montague clan, is depressed after falling for a girl who spurned his advances. Persuaded by cousin Tybalt, he sneaks into a Capulet ball in the hopes of finding her, until he sees Juliet and falls deeply and immediately in love. So begins a dramatic story that has gone on to become one of our greatest, tragic story of young love doomed from the start.

This production is recommended for those of at least 5 and older.

Sound good to you? Share this page on social media and let your friends know about Houston Ballet: Romeo And Juliet at Brown Theater.